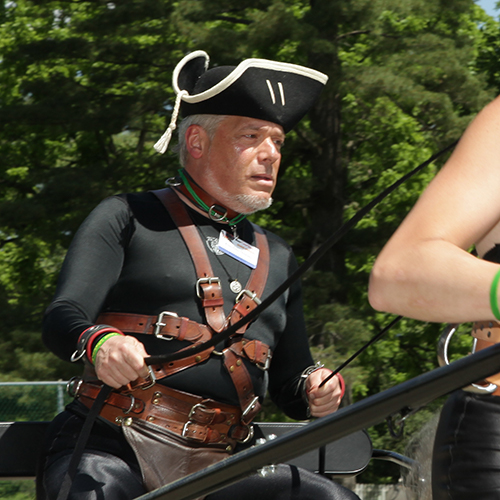 hails from Connecticut and got his start in pony play back in 2002. He has been “horsing around ever since” 🙂  Originally, he was owned and trained by Lady Emily Reed, the editor of Equus Eroticus magazine for many years. Later, with Lady Emily’s encouragement, Stormy began looking for a more local trainer who would “challenge” him and he found just that in LaDresseuse Maureen. Along with his beloved stablemate Ponyboy Rusty, Stormy worked with her from 2007 through 2014. For many years, Stormy has presented classes and demos at Camp and at the NELA Fetish Fleamarket. In addition to teaching, Ponyboy Stormy has won many ribbons including gymkhana, appointments, Grand Champion 2004, Grand Champion 2008 with Ponygirl Knightmare, Grand Champion 2012 with Ponyboy Rusty, and Reserve Champion 2017. Stormy has also won Champion at the 2008 CTK Pony Jamboree for the Blindfold Cart Challenge. Far more than shows though, Stormy just loves spending as much time in pony space as he can.  He is always happy to help new ponies and trainers get started.