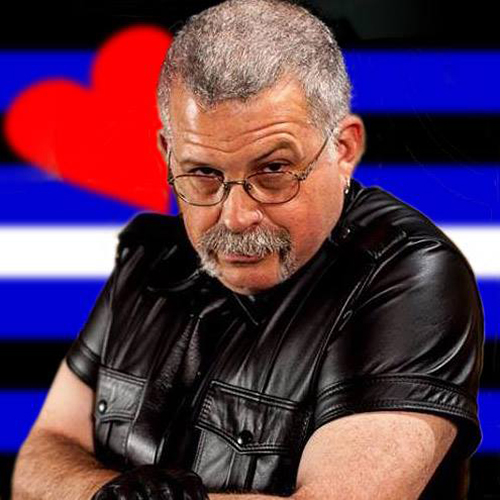 Hardy Haberman is from Dallas, Texas. He has been active in the leather community since the mid-70’s, and a member of many BDSM & Fetish organizations including Dallas Motorcycle Club, NLA-Dallas and a founding member of Inquisition-Dallas. Considering himself a “Pain Technologist” he specializes in CBT and has an unusual fondness for clips, clamps, & clothespins, as well as more esoteric SM play. Professionally he is a marketing specialist and filmmaker. His documentary on the leather lifestyle “LEATHER” has won numerous awards and appeared in festivals around the world, and his latest film, “Out of the Darkness, The Reality of SM” is currently being used by healthcare professionals around the world.

Outside work, he is a gay activist, author & speaker on aspects of the SM/Leather scene. His books The Family Jewels: A Guide to Male Genital Play and Torment published by Greenery Press and More Family Jewels: Playing With Pain and Soul of a Second Skin published by Nazca Plain. His latest book Shouts in the WIlderness: Daily Meditations for Leatherfolk is currently available on amazon.com.  He also writes a regular column in the Dallas Voice newspaper. Hardy was awarded NLA-I’s Man of the Year award in 1999 and the NLA-I Lifetime Achievement award in 2007 he received the National Gay & Lesbian Task Force Leather Leadership award.