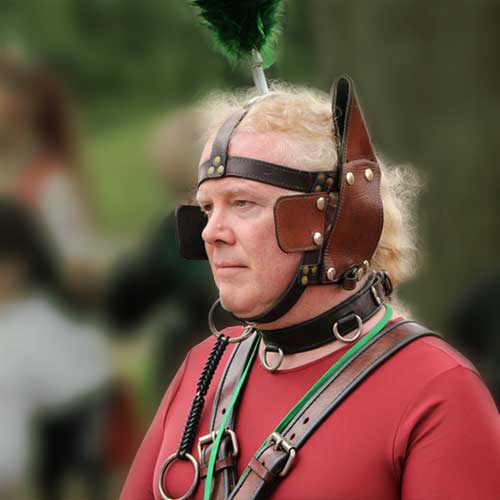 Ponyboy Rusty hails from Maine where he is a potter, an occasional magician, and an even more occasional ponyboy. In addition, Rusty holds a Bachelor’s Degree in Performing Arts and is a former Flamenco dancer. He entered the world of pony play in 2007 when LaDresseuse Maureen first placed a bit in his mouth. One week later, he had his first experience at dungeon play. Shortly thereafter, he became a denizen of Aphrodite’s Meadow Stable and the property of LaDresseuse Maureen. In 2008 he attended Camp Crucible for the first time. He has presented classes and demos at Camp and the NELA Fetish Fair Fleamarket for the last several years. Ponyboy Rusty has won many ribbons including Camp ribbons for gymkhana, Best Whinny, Dressage and, ironically, Most Likely to Take the Stage. He took Reserve Champion at the 2008 CTK Pony Jamboree for Advance Dressage and the Gauntlet Challenge. In 2012, Ponyboy Rusty and his stable mate Stormy were awarded the Grand Champion ribbon at the Camp Crucible Pony Show for their cart work with the beautiful Ms. Adelasia.

Ponyboy Rusty no longer belongs to Aphrodite’s Meadow Stable but remains dedicated to Aphrodite and all that She represents. Pony play is as much a spiritual experience as it is a form of play.